The Number of the Beast is the third studio album by Iron Maiden. The album was released on March 22, 1982 through EMI and on its sister label Capitol on the Harvest imprint in the US originally before it was re-released by Sanctuary/Columbia in the US. This was the debut of vocalist Bruce Dickinson in Iron Maiden. It has been cited as one of the most influential heavy metal albums of all time, and is widely acknowledged as one of the best and most iconic albums of the genre.

The Number of the Beast also cemented Iron Maiden as one of “the biggest metal bands on the planet”.

Of all the songs in the album, “The Number of the Beast”, “Run to the Hills” and “Hallowed Be Thy Name” remain on the set lists of nearly all of the band’s concert tours, with the latter two often used to close a show. All three songs have been released as singles in various forms. The album is also Iron Maiden’s highest selling album worldwide with over 14 million sales estimated.

The Beast on the Road was the tour supporting the album.

It was widely panned by mainstream media upon its release, including Rolling Stone, who claimed that it “blusters along aimlessly, proving again that bad music is hell.”

It was also panned by social conservatives, especially in America. Due to its title, Iron Maiden was called a “Satanic band” in the US. Their Beast on the Road tour was marred by boycotts and protests. However, it was well received by Iron Maiden fans and is considered to be one of their best albums.

IGN named it the third greatest heavy metal album of all time.

Metal-Rules.com named this the second greatest heavy metal album of all time.

The album is also a part of EMI’s “Albums That Shaped Rock History” series.

The album was also the centre of controversy, particularly in America, due to the lyrics of the title track and the cover art depicting Satan being controlled by Eddie. This cover art was originally intended for an earlier single, “Purgatory“, but the band felt the cover was too high of caliber for just a single and a less complex image was used for the single instead. The title track, “The Number of the Beast“, was said not be a satanic song but was actually instead inspired by bass player Steve Harris’s nightmare about being trapped in Hell, triggered after watching Damien: Omen II. The album’s cover art has been parodied several times – by crossover thrash band Stormtroopers of Death for the cover art of their 1999 album Bigger Than the Devil, and on a T-shirt by underground New York Hip Hop Label Uncle Howie Records. Streetwear brand Diamond Supply Co. parodied the album cover for a shirt in their line. Nick Tershay, founder of Diamond is reported as having had to pay $50,000 due to the parody being too close to the original art work.

The original 1982 artwork includes a light blue sky in the background; this was a mistake by the printers of the album cover, and was later rectified and became black when the album was remastered for compact disc in 1998.

Woe to you, oh earth and sea-
For the Devil sends the beast with wrath-
Because he knows the time is short-
Let him who hath understanding reckon the number of the beast-
For it is a human number-
Its number is six hundred and sixty-six-
I left alone, my mind was blank-
I needed time to think-
To get the memories from my mind-
What did I see? Can I believe?-
That what I saw that night was real and not just fantasy?-
Just what I saw in my old dreams-
Were they reflections of my warped mind staring back at me?-
‘Cause in my dreams it’s always there-
The evil face that twists my mind and brings me to despair-
Night was black, was no use holding back-
‘Cause I just had to see, was someone watching me?-
In the mist, dark figures move and twist-
Was all this for real or just some kind of Hell?-
Six six six, the number of the beast-
Hell and fire was spawned to be released-
Torches blazed and sacred chants were praised-
As they start to cry, hands held to the sky-
In the night, the fires are burning bright-
The ritual has begun, Satan’s work is done-
Six six six, the number of the beast-
Sacrifice is going on tonight-
This can’t go on, I must inform the law-
Can this still be real, or just some crazy dream?-
But I feel drawn towards the chanting hordes-
Seem to mesmerize, can’t avoid their eyes-
Six six six, the number of the beast-
Six six six, the one for you and me-
I’m coming back, I will return-
And I’ll possess your body and I’ll make you burn-
I have the fire, I have the force-
I have the power to make my evil take its course- 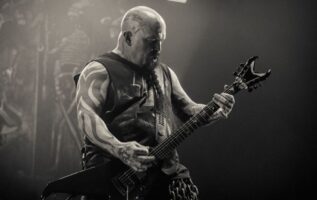 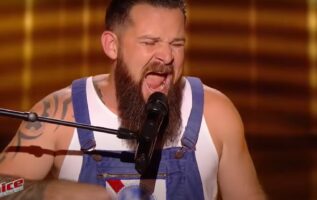